The smiley, surreal and slapstick is back, collar and all, with new show Pedigree Fun!

Harry Hill has announced new tour Pedigree Fun, which he'll be taking to a long list of cities including Leeds, Nottingham, Aberdeen, Torquay, Cardiff and more in October and November 2022. Expect Harry's partner in crime Stouffer the Cat to make an appearance, plus a debut from Ian, The Information Worm and Sarah the elephant.

Though today the only tonic Harry Hill prescribes is a healthy dose of laughter, the comedian originally trained to be a doctor, graduating from the University of London in 1988 and landing a position at Doncaster Royal Infirmary. But not feeling it was the right calling, at 25 Hill quit the profession and began making a name for himself as a stand-up, and in 1992 caught enough attention at the Edinburgh Fringe Festival – a rite of passage for any aspiring British performer – to win Best Newcomer in the Perrier awards (now the Dave's Edinburgh Comedy Awards). Soon after Harry Hill’s Fruit Corner was commissioned on BBC Radio 4, a surrealist comedy built upon a fictional family that included Al Murray, Phill Jupitus and the late Matt Bradstock-Smith. 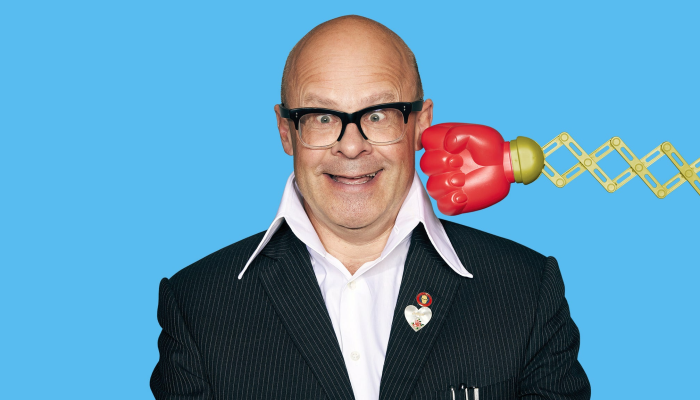