In Conversation with Sir Geoff Hurst @ The Bowdon Rooms

Across the world, Sir Geoff Hurst certainly needs no introduction.

He is a sporting legend who is still the only player ever to score a hat trick in A World Cup Final.

Sir Geoff made his name with club side West Ham United, with whom he made 499 league and cup appearances, scoring 248 goals.
He was Player of the Year three times and won the F.A Cup with West Ham in 1964 and the European cup winners cup in 1965.

However, it was playing in the national side that launched Sir Geoff as a world football icon-not only as being part of the England team that won the World Cup in 1966 but also scoring a hat trick in that final. Hence Kenneth Wolstenholme´s immortal words “They think its all over — it is now”.

In the Autumn of 1998 the BBC announced that the England fourth goal with Kenneth uttering those immortal words, has been the most shown sporting piece of footage ever seen on television..

After leaving West Ham, Sir Geoff then played for Stoke City with 100 appearances and 30 goals, then West Bromwich Albion for 1 year. He then became player-manager for Telford and also had spells playing in America and Kuwait.

Sir Geoff went on to become the assistant coach to the England National team under Ron Greenwood from 1977 to 1982, and then became the manager of Chelsea for 2 years.

The standing ovations he receives proves that Sir Geoff Hurst is far more than a footballer that got lucky on one hot July afternoon. 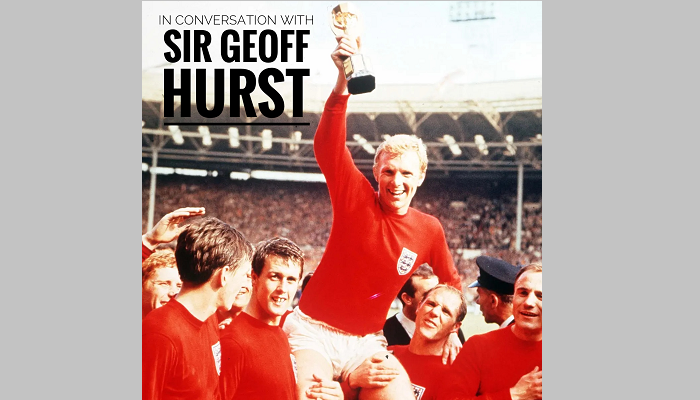 In Conversation with Sir Geoff Hurst @ The Bowdon Rooms